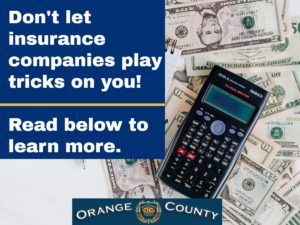 Common Tricks Played on Car Accident Injury Victims – Been involved in an accident and are now concerned that the adjuster is playing you? You should be. Here are some common deceptions that the adjuster might use to undermine the bodily injury portion of your case. From tricks to downright unethical tactics, many are deceived to some degree on every single car collision claim. Many are implemented swiftly before the claimant has a chance to understand what is happening or to consult with an auto accident attorney about their rights. All that follows is taken from real life situations from the perspective of a car injury lawyer in the practice of personal injury law in Southern California.

Shortly after a car accident, the insurance carriers of all persons involved in the collision are usually notified. Those involved call their insurance company to report a claim on their policy, or to report that someone might be claiming against their own policy. Right away the carrier dispatches adjusters/claims examiners who get involved to determine who is liable and for how much. They immediately hit the phones calling any and all possible claimants on the insurance policy to find a way to avoid liability completely. Why? Because they make their money by paying out to the least number of people as possible and in the least amount. In other words, you are not in good hands!

The Recorded Interview, Liability – This is the most effective tool the insurance company will use to pin down a story of a potential claimant. Oftentimes the claimant is still shaken by the traumatic event and is usually still in severe pain from injuries sustained in the collision. Without adequate time to reflect upon what happened, without the knowledge of relevant facts from other witnesses, and without proper legal protections, the injury person starts putting out statements while being recorded over the phone. During the recorded conversation, the adjuster guides their victim or pushes them to present the facts in a way that is adverse to their case, even where ascertainable objective facts show that the collision was not their fault Once recorded interview is obtained, the adjuster quickly blasts out a letter denying all liability on the claim despite objective proof that their insured is liable.

The Recorded Interview, Nature and Extent – In other instances, the facts stated by the possible claimant show, consistent with other facts, that the examiner’s company is liable. In such instances, the adjuster will ask specific questions about the person’s health condition following the truck collision. The goal is to get the victim talking about their injuries before the time frame in which their nature and extent (severity) is fully realized. When pain becomes more severe later on or when new areas or conditions arise, the carrier will then claim that since they were not originally complained about in the recording that the person is lying (aka, has made an inconsistent statement).

Do not be fooled into having yourself recorded. You have a right to refuse and to seek legal representation from an experienced truck accident attorney in Orange County, California! Call us immediately at (714) 265-7526! 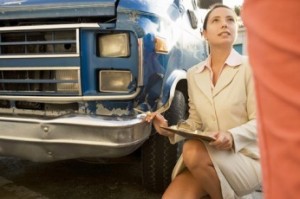 Another deceptive tactic or trick implemented by the adjuster is to consistently discount the person’s injuries over the phone. Each time there is telephone contact the claims examiner will encourage the injured person that their case is a minimal one and that it’s not worth much money. Within a few weeks the adjuster is throwing out some lowball numbers. If they get a hint that the person will accept a low offer, they blast them some settlement checks in the mail without saying anything. The unknowing victim receives the check and if it is cashed, the insurance company will claim consideration has been paid to settle the bodily injury claim. While this may or may not be so, once cashed it is used to “close down the claim” and stop talking to the victim in hopes they are tricked into the settlement.

Do not be tricked, hire an auto accident injury lawyer if this is happening to you!

Yet another deceptive trick that is the simplest of all is not picking up the phone and not returning phone calls. This is the one that is the most common. Whether on purpose or due to inadvertence, it happens and it is powerful. When the victim is busy with other things in their life and cannot get a hold of anyone, they often just go away or do not do anything for months on end. Then when they finally decide to pursue something months later, the insurance carrier denies the claim on the basis of it being asserted months after the incident. Where the person claiming benefits fails to obtain medical care for their injuries in a timely fashion, it is arguable whether their injuries arose from the collision at all and not at a later date.

by Hiring an Auto Accident Lawyer

If you are in need of medical treatment a car accident attorney can help you find a doctor to treat on a lien basis. This means that the doctor is paid out of the proceeds of the lawsuit and demands no money up front. The delayed bill gives the person time to settle their case to get funds before payment is due. For those without adequate health insurance or high deductibles, this is a significant benefit to hiring a lawyer to bring a lawsuit on their behalf.

Again, do not be tricked! Talk with an auto accident injury lawyer before it is too late! We can provide the advice necessary to combat these deceptive tactics and achieve needed medical care, money compensation and justice! Start today with a free legal evaluation of your case one on one with an attorney at law.

For more information about us, who represents people in Garden Grove, Santa Ana, Anaheim, Fullerton and Orange in Orange County California,, read more at www.autoaccidentlawyeroc.com.